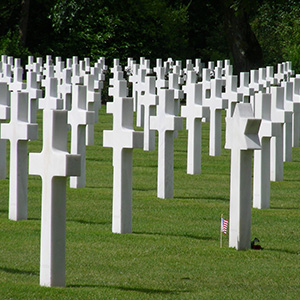 This touching tour of Normandy is ideal for history buffs and World War II aficionados eager to personally explore the sacred sites of Operation Overlord, the codename for the D-Day landings on June 6, 1944. On this stirring tour, you’ll see where more than 150,000 mostly American, British, and Canadian troops stormed 50 miles of fiercely defended coastline, securing an Allied victory, and gaining a foothold in the fight against Nazi Germany. Your expert Tour Director will lead you to the many significant sites of that fateful day, including the cliffs scaled by troops at Pointe du Hoc as well as the assault shores of Utah, Juno, and Omaha Beach. You’ll have time to explore the moving memorials and museums of each site, including the emotive American Military Cemetery and Memorial. Start and end this incredible journey in magnificent Paris.

As the French capital, Paris is the commercial, financial, and industrial focus of France, a major transportation hub, and a cultural and intellectual center of international renown. A beautiful city in which tourism is the main industry, Paris is cut by the Seine River. On its stately, formal right (northern) bank are many of the most fashionable streets and shops, and such landmarks as the Arc de Triomphe, Place de la Concorde, Louvre, and Sacré Coeur.

The left bank houses governmental offices and is the site of much of the city’s intellectual life. It is known for its old Latin Quarter and for such landmarks as the Sorbonne, the Luxembourg Palace, the Panthéon, and the modern Pompidou Center (see Beaubourg). The historic core of Paris is the Île de la Cité, a small island occupied in part by the Palais de Justice and the Cathedral of Notre-Dame de Paris. Above the city rises the Eiffel Tower. Paris is divided into 20 arrondissements (boroughs) and governed by a mayor.

A fishing village when it was conquered (52 B.C.) by Caesar, it became an important Roman town. It was a Merovingian capital in the 5th cent. and became the national capital with the accession (987) of Hugh Capet, count of Paris. It flowered as the center of medieval commerce and scholasticism but suffered severely during the Hundred Years War. Paris consistently displayed a rebellious and independent spirit, as in its resistance to Henry IV (1589-93); the first Fronde (1648-49); the revolutions of 1789, 1830, and 1848; and the Commune of Paris (1871). During World War II it was occupied (1940-44) by the Germans but was relatively undamaged.

Prices are per person, land or cruise only, based on double occupancy. Offer subject to availability and change without notice. Some restrictions may apply. Please ask us for details.

Charges not included in the land vacation price: airfare to and from the start of your vacation; airline baggage fees including checked and/or excess baggage fees; Federal inspection fees for the Federal U.S. Customs and Immigrations; agricultural tax; other per person taxes imposed by government entities; applicable cruise taxes, fees, fares and port charges; passports; visas and vaccinations; transfers; tips to your Tour or Cruise Director, Local Host, driver, Local Guides, and/or ships’ crew; gratuities on ferries, trains, and cruise ships; laundry; telephone; minibar; alcohol, beverages, and food outside of the contracted menu as presented at a hotel or restaurant (these extra items will be billed to you before leaving the hotel, ship, or restaurant); additional excursions and activities not listed as ‘included’ in the itinerary; porterage at airports or train stations; Travel Protection premiums; and all other items of a personal nature.